A Lovely but Hard-to-Find Play, Now Available to You at the Touch of a Button 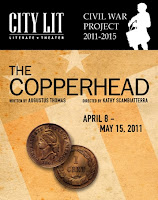 Our production of Augustus Thomas's The Copperhead this past April, the first show of our Civil War project, was apparently the play's first production in decades.  It had been a Broadway hit in 1918, and spawned a movie version in 1920, but we were never able to find out its production history beyond that.  I emailed Samuel French, its erstwhile publisher, to ask if they could let us know when the last licensed production occurred.  They wrote back that once the play had passed into the public domain, they stopped keeping records of any productions.  I had assumed that would be the case, which is why I had asked about licensed productions, but my follow-up email pointing this out went ignored.

I bring this up by way of saying The Copperhead is a terrific play that more people should do.  Most American drama from its period, not written by Eugene O'Neill, has lapsed into obscurity.  This is largely because we're embarrassed by the remnants of 19th-century melodrama  that cling to most early 20th-century American plays.  The Copperhead has its share of these remnants, but--there is no higher praise in the theatre--it works.  Our director, Kathy Scambiatterra, had it played straight--no nudging the audience to assure them that we're all more sophisticated than the script--and when the play's climax needed to move the audience, there were tears in the house every night.

I'm posting a pdf of The Copperhead's script here.  If you're with a theatre company, download it and consider it for production.  There are no royalties involved, so to a degree the expenses of a large cast and period costumes and props are offset.  Your company might (should, in my opinion) want to do at least one play connected to the Civil War during the sesquicentennial, and The Copperhead is a lovely script.  There'll be no other show in town like it.  Here's a link to a round-up of the reviews we got, so you can see the range of how the script was perceived.

Email ThisBlogThis!Share to TwitterShare to FacebookShare to Pinterest
Labels: Copperhead