So we can probably eliminate the Canadians as suspects. 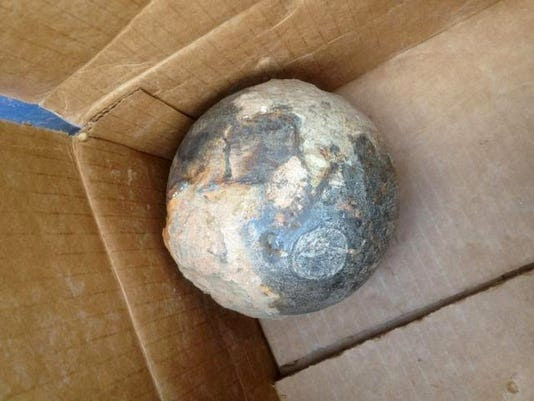 "The reason for it's [sic] being there remains a mystery," the paper says in the three-sentence summary it runs next to the seven-sentence story, for those too busy to plow through the whole thing.  The article itself offers that "there are at least two possible scenarios for how it got there."

It then goes on to cite an Atlanta historian--who, to be fair, undoubtedly had plenty of interesting things to say that weren't included in the article--as to what those scenarios are.

One is that it's from the Union Army.

The other is that it's from the Confederate Army.
Posted by Terry McCabe at 9:33 AM 0 comments

I wrote back in 2011 about the possibility that the nation's theatre companies might outshine the federal government in observing the sesquicentennial; here's evidence that's happening:  Four regional theatres and a performing arts center have announced partnerships with four universities to commission, develop, and premiere several new pieces of professional theatre relating to the war, along with presenting student work and academic symposia and the like.  The umbrella organization calls itself the National Civil War Project.

"The American Civil War is arguably one of the most significant times in American history, an era that raised issues still relevant today," the press release's lead paragraph says in a sentence that does nothing but demonstrate how useless the word "arguably" is.  (Is there really an argument to be made that the Civil War is not one of the most significant times in American history?  Could we hear that argument, please?)  The institutions involved are located in a few cities not all that far apart from each other, all on or near the Atlantic:  Cambridge, Atlanta, Baltimore, Washington, and a Maryland suburb of Washington called College Park.  "These diverse localities symbolize the geographic scope of the American Civil War," the press release tells us with a straight face.  I guess "symbolize" can mean whatever it wants in this context, but in truth the geographic scope of the war comprised fighting in twenty-three states and six territories, plus naval battles. The final shot of the war was fired by a Confederate warship disrupting Union trade off the coast of Alaska; the final land battle was in Texas. No battles occurred in Massachusetts, however, so I suppose Cambridge symbolizes the siege of Vicksburg or something.

All right, so the press release is badly written and the project itself is not really national; the Tri-State-and-Federal-District Civil War Project is still an ambitious undertaking that may well generate a bunch of good plays, and so more power to them. Here's how it's supposed to go:

The Alliance Theatre in Atlanta is working with Emory University to develop and produce a stage version of Native Guard, a Pulitzer Prize-winning book of poetry about the Louisiana Native Guards, a Union regiment made up of former slaves.  The author is Natasha Trethewey, head of Emery's creative writing program, who also double-dips as Poet Laureate of both the United States and the State of Mississippi. She'll be working on the show with Alliance's artistic director, Susan V. Booth, who directed shows around Chicago for a number of years and does great work.

American Repertory Theater, housed at Harvard University, is collaborating with its landlord on a set of programs that include developing and producing three shows:  The Boston Abolitionists, about the Anthony Burns trial, to be devised by an ensemble of students in A.R.T.'s training program; War Dept., a musical being written by composer Jim Bauer and visual artist Ruth Bauer that A.R.T. describes as a show "set in Ford’s Theater that explores the lives of friends and family who search for answers among the records of the Civil War dead and wounded;" and Memoranda During the War, an opera being composed by Matt Aucoin based on Walt Whitman's journals of his time as a volunteer nurse in military hospitals during the war.

There are few cities that have the rich and complicated Civil War history that Baltimore has, but Center Stage in Baltimore (whose website renders its name both as one word and as two--is this really a hard thing to get the board to vote on?), working with the Clarice Smith Performing Arts Center at the University of Maryland, says it's commissioning an as yet untitled work by "a leading British playwright" that will explore British and international perspectives on the war.  Um, okay.  They also promise "the regional premiere of a Civil War-themed work around which significant artistic and community engagement programming will take place;" that turns out to be Paula Vogel's lightweight holiday show A Civil War Christmas.  Ah well, so much for seizing the opportunity at Center Stage.

Arena Stage in Washington, in collaboration with George Washington University, plans three shows. One is Healing Wars, a dance piece with narration conceived and to be choreographed by Liz Lerner, whose idea the whole Project is.  It "explores the experiences of the healers tasked with treating the physical and psychic wounds of battle."  Our War will be an anthology piece commissioned from 25 playwrights that promises to be about not just the war but its continuing legacy.  As yet untitled is a new piece from serial one-man-show deviser Daniel Beaty, "portraying the depth and breadth of humanity involved in the American Civil War."  I presume Beaty, who's apparently great at this kind of thing, will play them all.

Most of this seems like a healthy amount of interesting activity.  Let's hope something comes of it.
Posted by Terry McCabe at 11:26 AM 0 comments 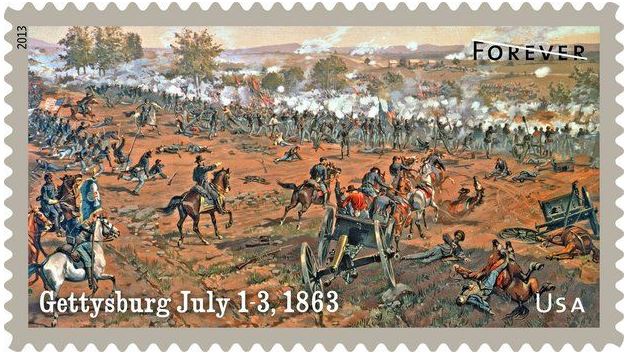 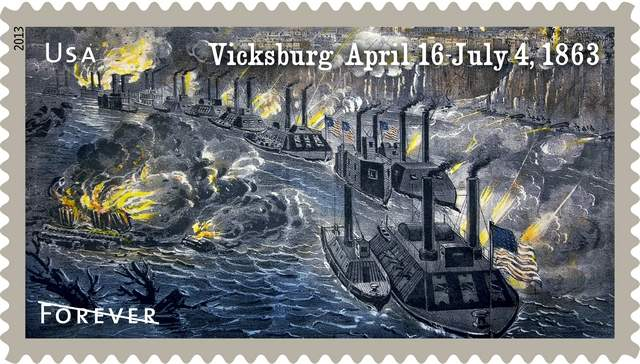 I've been absent from the blog for over six months, mostly due to a mild case of exhaustion--not fatigue or burnout, just an accumulated period of sleep deprivation.  I'm all rested now, I've made some permanent changes to my schedule and one thing I missed blogging about back in May when it was news was the release of this year's Civil War stamps.  Every year during the sesquicentennial the Postal Service issues two stamps, each commemorating a key military event from 150 years earlier.  The 2013 stamps commemorate, inevitably, the siege of Vicksburg and the battle of Gettysburg, the twinned events that turned the course of the war toward Union victory during the first week of July 1863.  The Vicksburg stamp is taken from a Currier and Ives print published while the seige was still ongoing; the Gettysburg stamp is from an 1887 painting of the battle done by our old friend Thure de Thurlstrup, whose painting of the battle of Antietam was the basis for one of last year's stamps and who also painted "Sheridan's Ride."

The specific event portrayed by Currier and Ives was summed up in the caption they gave their engraving:  "Admiral Porter's Fleet Running the Rebel Blockade of the Mississippi at Vicksburg, April 16, 1863."  Here's the original, via the Naval Historical Center: 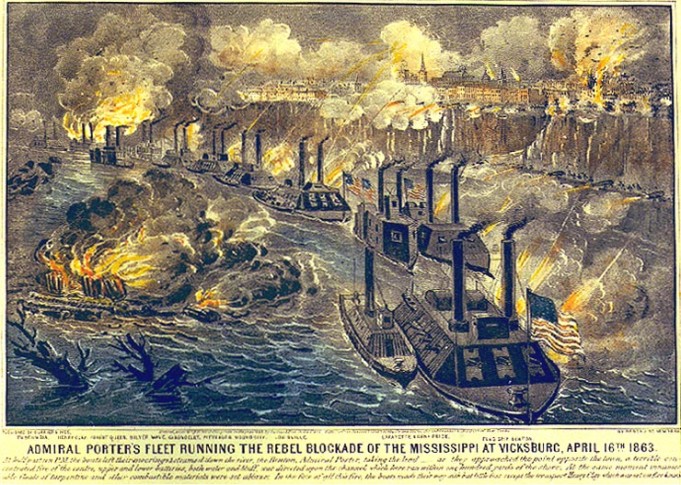 The script under the headline caption gives these details:


"At half past ten P.M. the boats left their moorings & steamed down the river, the Benton, Admiral Porter, taking the lead -- as they approached the point opposite the town, a terrible concentrated fire of the centre, upper and lower batteries, both water and bluff, was directed upon the channel, which here ran within one hundred yards of the shore. At the same moment innumerable floats of turpentine and other combustible materials were set ablaze. In the face of all this fire, the boats made their way with but little loss except the transport Henry Clay which was set on fire & sunk."

Fun fact to know and tell:  Admiral David Dixon Porter was the brother by adoption of Admiral David Farragut, whose capture of New Orleans was depicted on one of last year's stamps.

The Thurlstrup painting upon which the Gettysburg stamp is based depicts a moment of Pickett's Charge, perhaps the climax of the whole war.  Specifically, it shows General Winfield Hancock overseeing the devastating Union defense against the charge.  Thurlstrup had been commissioned to paint twelve Civil War battles by L. Prang and Company, the commercial printer who popularized the Christmas card.  Prang paid for careful research, and preliminary sketches were vetted by survivors of each battle depicted. 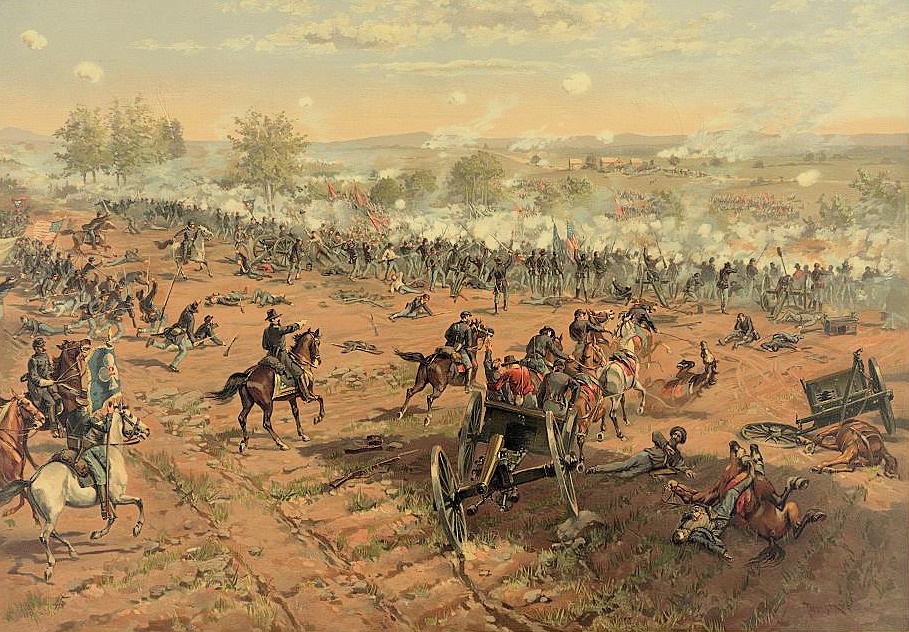 Thurlstrup's (or perhaps Prang's) title for the painting was "Hancock at Gettysburg," though today it's more often called simply "Battle of Gettysburg."  A further indication of how much Hancock's Civil War fame has faded is that the Library of Congress makes a rookie error in its listing for this painting:

"George" is Pickett's first name, not Hancock's.  And of course Hancock is not leading the charge, he's defending against it.

One other thing:  I want to stress just how great this whole series of stamps is.  Compare them with two other Gettysburg commemoratives. 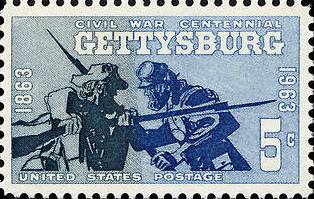 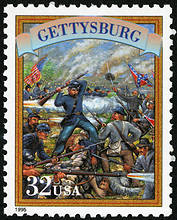 The one to the left was issued in 1963 as part of the Civil War Centennial.  Nothing wrong with it, of course, but it doesn't even attempt the richness of historical detail or the sheer  gorgeousness of  the stamps we're getting now.  It is, however, miles above the cheesiness of what they issued in 1995, shown on the right.  This one purports also to show Pickett's Charge, but except for the stone wall it could almost be any generic Civil War battle.  And, for crying out loud, Brenda Starr had better artwork. 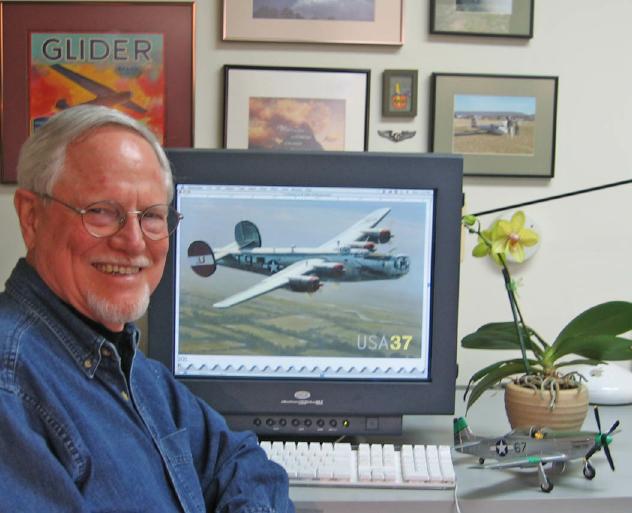 The art designer for the Civil War Sesquicentennial stamps is Phil Jordan, and if the budget sequester hasn't eliminated his contract, he should renegotiate for
more money.  I learn from the website for something called Knottywood Treasures that he was art director for Air and Space, the magazine of the Smithsonian Institute's Air and Space Museum, for fifteen years and has designed over 250 stamps for the USPS on a contract basis since 1991.  He designs a lot of air-and-space-related stamps, commemorating things like the first moon landing and classic American aircraft.  He also did the great Thornton Wilder stamp, which I'm inserting here because I find playwrights more interesting than airplanes.
Posted by Terry McCabe at 9:19 PM 0 comments