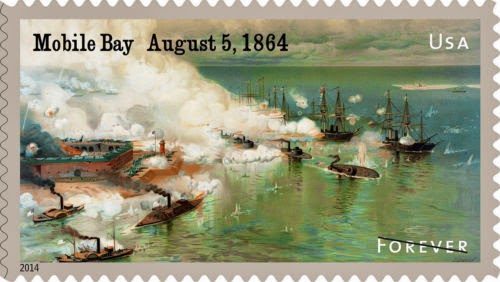 Other than our own Civil War Project, my favorite part of the sesquicentennial so far is the gorgeous series of commemorative stamps being issued, two each year, by the U.S. Postal Service, all designed by Phil Jordan. 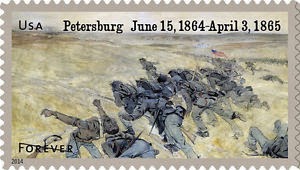 The stamps for 2014 commemorate key military events from 1864, specifically the early days of the Petersburg Campaign and the Battle of Mobile Bay.

Petersburg, Virginia is about 30 miles from Richmond, the Confederate capital, and was in 1864 a transportation center instrumental to supplying food to both Richmond and Lee's army.  Grant spent nine and a half months trying to take the city through a series of battles and the most extensive trench warfare prior to World War One.  The Union scored no victories at Petersburg until late August, and suffered losses that horrified the nation:  at least 42,000 casualties over the length of the campaign; more than 11,000 in its first four days.  But when Petersburg finally fell, the Confederates were forced to abandon Richmond the same day, and Lee's army had no option but a desperate retreat that led to its being surrounded and forced to surrender at Appomattox six days later.

The Petersburg Campaign saw the war's largest concentration of African American soldiers; the specific scene depicted on the stamp is the Twenty-Second U. S. Colored Troops charging Petersburg's outer works on the second day of the campaign.  It's taken from an 1892 oil painting entitled "Charge of the 22nd Negro Regiment during Civil War, 16 July 1864" by J. Andre Castaigne.  The original hangs in the West Point Museum, and no full-color electronic image of it seems to be available anywhere online.  Below is the New York Public Library's print of the painting: 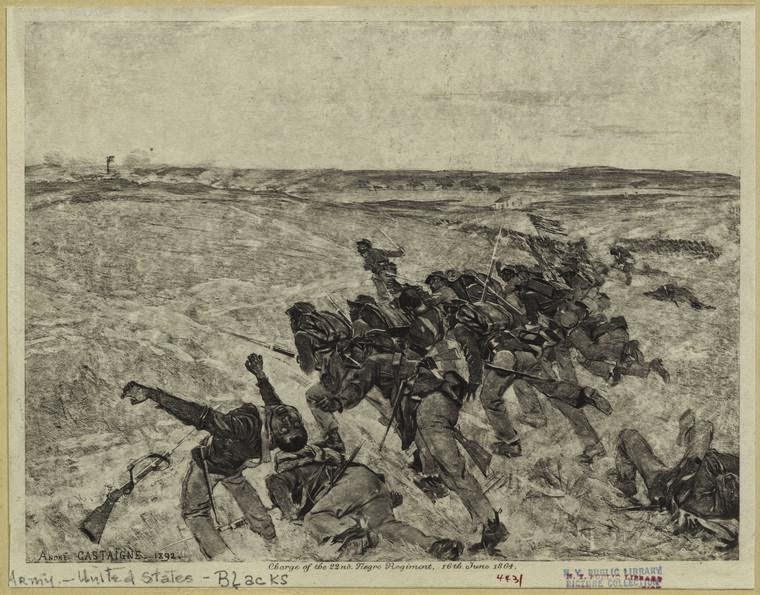 Castaigne was a French illustrator who worked in the United States for five years in the 1890s, and occasionally thereafter.  When he's remembered, it's mainly as the original illustrator of the novel The Phantom of the Opera.

The Mobile Bay stamp illustration is taken from an 1886 painting by Julian Oliver Davidson, Battle of Mobile Bay.  It shows the sinking of the ironclad USS Tecumseh, following its running into a Confederate torpedo (an 1860s torpedo was not a projectile, but a stationary underwater mine).  Tecumseh took only 25 seconds to sink, and moments later Union Admiral David Farragut, on the flagship Hartford (second wooden ship from the right in the painting), ordered it to move through the minefield.  It is when the torpedoes in Hartford's way were pointed out to him that he is supposed to have said "Damn the torpedoes!  Full speed ahead."  Whether or not he said precisely that, Hartford did lead the way successfully through the minefield.  This brought the Union fleet out of the range of Confederate land guns and led to the surrender of the Confederate fleet and the capturing of the last important Confederate Gulf port east of the Mississippi.  Here's the full picture: 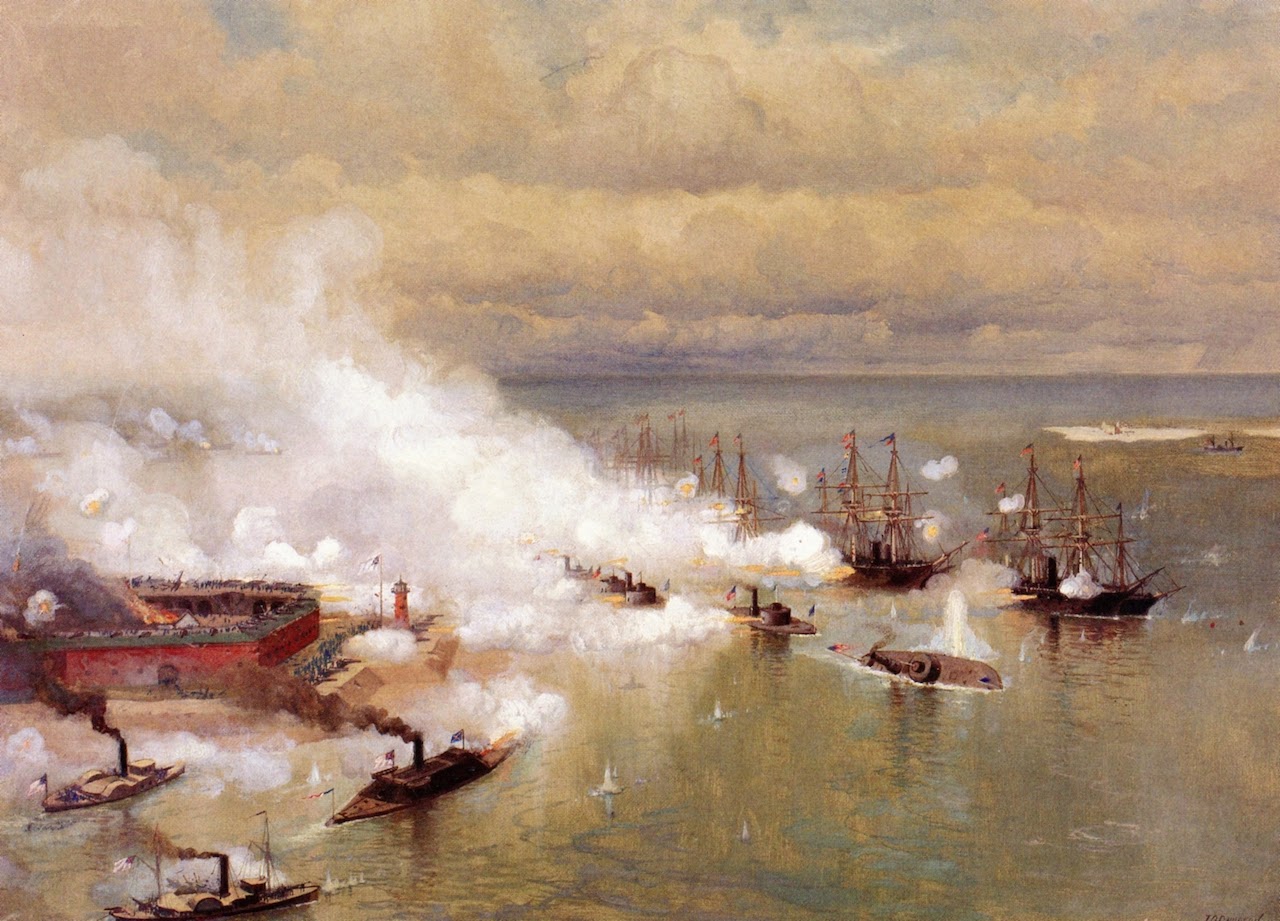 Davidson was the country's leading marine artist, and was commissioned by Louis Prang (originator of the American Christmas card) to paint six naval battles as part of his series of well-researched depictions of Civil War battles, which he ran off as inexpensively priced chromolithographs.  It's the same series for which Prang hired Thure de Thurlstrup to paint twelve infantry scenes

This is the second stamp in this series to feature Farragut's fleet; in 2012 one of the 1862 stamps showed him in the process of capturing New Orleans.  His foster brother, Admiral David Porter, commanded the fleet depicted on last year's 1863 stamp running the Confederate blockade at Vicksburg, so their family has been represented on three of the eight Civil War stamps so far.

The stamps are being issued July 30 at Mobile and Petersburg.

Posted by Terry McCabe at 4:53 AM 0 comments