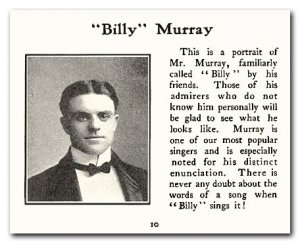 Speaking of our new friends at the Library of Congress, here's something from their National Jukebox:  Billy Murray on the Victor label in 1915 singing "If War Is What Sherman Said It Was (Then Tell Me, What is Married Life?)"  Their embedding feature doesn't seem to work--or maybe I'm doing it wrong, as the old Randy Newman song says--so here is the link:

The song is by lyricist Andrew B. Sterling, a Songwriters Hall of Famer whose big credit remains "Wait Till the Sun Shines, Nellie," and journeyman composer Albert Gumble.  Murray was the biggest recording star of the twentieth century's first two decades, whose career faded away when the electric microphone was invented and enabled a more intimate type of singing than the full-throated loudness that the acoustic recording horn required.  In his 20-year heyday, he sang the original recordings of dozens of standards, including "In My Merry Oldsmobile," "Harrigan," "K-K-K-Katy," and (as lead tenor of the American Quartet) "Oh, You Beautiful Doll."

Email ThisBlogThis!Share to TwitterShare to FacebookShare to Pinterest
Labels: "If War is What Sherman Said It Was", Billy Murray, Library of Congress, National Jukebox

Though City Lit is the only theatre in Chicago the nation producing an in-depth Civil War Sesquicentennial project lasting as long as the war itself--our project's first show opened in April 2011 and its last one will open in April 2015--I'm glad to see that there are other theatres here and there also doing some Civil War-related shows.

Let's look at some happening here in Chicago:

Jackalope Theatre is currently running Chicago playwright Shawn Reddy's play My Name is Mudd, which of course has to do with Dr. Samuel Mudd, who set Booth's leg while the assassin was trying to get to the hero's welcome he thought awaited him in the South.  I haven't seen it, but I gather it is a vaudevillian satire played essentially from Booth's perspective, and it involves a descendant of Mudd's trying to clear his name, and there's a running joke involving top hats.  The reviews have been all over the map, which may only demonstrate once again Oscar Wilde's point about the artist being in accord with himself.  The show plays through October 2.

I should mention Mourning Becomes Electra beginning previews tomorrow at Remy Bumppo Theatre, though it only happens to be set at the end of the war; it's not in any way about the Civil War.  It's Eugene O'Neill's rewrite of the Oresteia, rarely done and certainly worth seeing (though Remy Bumppo says it's doing a shortened version; ah well).

And then there's The March, opening next April at Steppenwolf.  It's Frank Galati's world premiere adaptation of E. L. Doctorow's multi-award-winning novel about Sherman's march through Georgia.  Galati is the only real genius in Chicago theatre (sorry, Mary Zimmerman and David Cromer), and he has a deep connection to Doctorow's work, going back to the years he spent developing (and  then directing on Broadway) the musical version of Ragtime.  I can't wait for this one.
Posted by Terry McCabe at 3:12 PM 0 comments

Say what you want about Congress, but they run a great library. 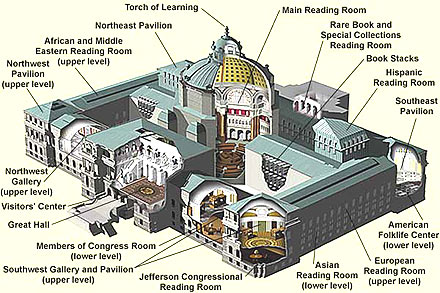 So we got this email the other day from (ahem) the Library of Congress:

The United States Library of Congress has selected your website for inclusion in the
historic collection of Internet materials related to the American Civil War
Sesquicentennial.

The Library of Congress preserves the Nation’s cultural artifacts and provides
enduring access to them. The Library’s traditional functions, acquiring, cataloging,
preserving and serving collection materials of historical importance to the Congress
and the American people to foster education and scholarship, extend to digital
materials, including websites.

The following URL has been selected for archiving: citylitcivilwar.blogspot.com

We request your permission to collect your website and add it to the Library's research
collections.

We've said yes, of course.
Posted by Terry McCabe at 8:06 AM 0 comments

Email ThisBlogThis!Share to TwitterShare to FacebookShare to Pinterest
Labels: Library of Congress

The Titus Andronicus from New Jersey, not ancient Rome

Indie band Titus Andronicus put this out a couple of years ago--a Civil War-themed punk album called The Monitor, after the Union ironclad vessel.  This is track one, "A More Perfect Union."  One nice touch is that, though Lincoln is usually portrayed as a baritone, this number opens with an excerpt from his Lyceum speech read in a nasal tenor twang, which is supposed to be more like how he sounded.  No idea if they were equally fastidious about the William Lloyd Garrison portrayal that ends the song.
Posted by Terry McCabe at 2:18 AM 0 comments