﻿﻿﻿﻿
Lincoln in the news on his birthday:

Today Ford's Theatre held an open house for its new $25 million Lincoln Museum.  From the New York Times article:  "Lincoln has long been at the heart of the capital city: the National Mall is an affirmation of the Union he championed, the Lincoln Memorial on one end, and the Ulysses S. Grant Memorial on the other. But there was, until recently, no extensive exhibition here about Lincoln and his times. Ford’s Theater, Mr. Tetreault explained, used to be a brief stopping point.  Now, with these exhibitions, Lincoln has found a home in a place best known for his death."

A famous portrait of Mary Todd Lincoln, and the tearjerker story behind it, have both been revealed as frauds concocted in the 1920s to cheat the Lincoln family out of a few thousand dollars.  Via the Boston Globe:  "The Lincolns were not the only ones fooled. Ever since The New York Times announced the portrait’s discovery in 1929, on Feb. 12, Lincoln’s birthday, historians and the public have assumed it depicted Mary Todd Lincoln. It was reproduced in The Chicago Tribune and National Geographic, and versions of it still illustrate at least two biographies, including the latest paperback edition of Carl Sandburg’s 1932 Mary Lincoln: Wife and Widow."

The U.S. Department of Agriculture, which Lincoln created in 1862, is celebrating this week in Springfield by giving away free seeds for the Lincoln Tomato.  The Springfield State Journal-Register has the details.

Lech Walesa was in Springfield Friday, two days too soon to get free Lincoln Tomato seeds, touring the Lincoln Museum there, which has an exhibit on Walesa running through March 5.  Here's the Rockford Register-Star.

People like to argue over whom Lincoln would agree with today.  Here's Jackie Hogan in the Atlanta Journal-Constitution claiming today's Republican Party would have nothing to do with Abe:  "He was the first American president to sign federal income tax into law. And not only that, but it was a progressive income tax, with the wealthiest Americans paying a higher rate."

On the other hand, Joseph A. Kohm Jr., blogging for The American Thinker, believes that if Lincoln were alive today, he's be part of the anti-abortion rights movement:  "Historians tell us the deaths of his mother, sister, first love, and second child, each took a heavy emotional toll on his psyche.  The well-chronicled depth of Lincoln's despair as he mourned those mentioned above was so profound that it is impossible to conclude that he did not contemplate and examine the very quintessence of life, including its significance, origin, cessation, and most importantly for the unborn, qualification."

The best news of all:  At an Anaheim (California) City Council meeting on Tuesday, Patsy Bauman's kindergarten class, dressed in homemade stovepipe hats and fake beards, recited the Gettysburg Address, which they had spent two months learning by heart.  They repeated the performance for their whole school on Friday.  The Orange County Register has the scoop, and a video of all 19 of them going at it in what passes for unison.

And then there's this.
Posted by Terry McCabe at 9:23 PM 2 comments

Email ThisBlogThis!Share to TwitterShare to FacebookShare to Pinterest
Labels: Lincoln

For Lincoln's birthday this Sunday--203 years old and still lookin' good--here is a one-minute clip from a recently rediscovered 1913 silent film called When Lincoln Paid.  It had gone missing for 90-some years until a print was discovered in 2006 in a barn in New Hampshire.  It stars and was directed by Francis Ford, the older brother and professional mentor of the great American film director John Ford.  I learn from Wikipedia that Francis Ford played Lincoln in at least seven silent films--all of them lost, until this one was found.  Francis was a big name in silent movies, but his career declined thereafter.  His last directing credit was in 1928, though he worked as a character actor into the 1940s.  His younger brother John, who learned much about film-making from him, consistently cast him in small, relatively unimportant, roles in his films, including an uncredited bit part in 1939's Young Mr. Lincoln, which starred Henry Fonda.
Posted by Terry McCabe at 9:48 PM 0 comments

If the US Postal Service stays in business long enough, it will issue a pair of Civil War commemorative stamps for each year of the sesquicentennial.  The two 2011 stamps (the firing on Fort Sumter, and First Bull Run) commemorating 1861 were gorgeous, and the USPS has just announced the 2012 stamps commemorating 1862, which become available in April (after the first class letter rate goes up a penny). 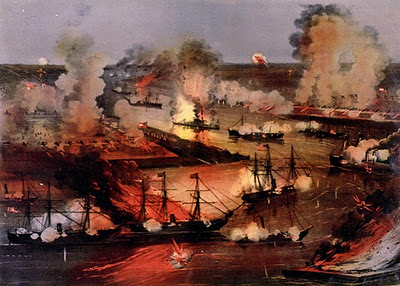 As you can see above, they commemorate the capture of New Orleans and the battle of Antietam.  The New Orleans stamp uses as its illustration a detail from this Currier and Ives lithograph alternately titled "The Splendid Naval Triumph on the Mississippi, April 24th, 1862" and "Farragut's Naval Triumph on the Mississippi, 24th April, 1862," published shortly after the event.  Farragut's splendid triumph on this day was that he made it past Fort Jackson and Fort St. Philip, both of which guarded New Orleans, thus making its surrender to Union forces inevitable. 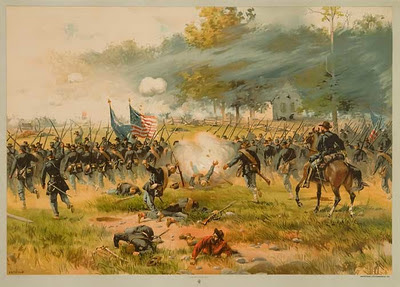 The Antietam stamp's illustration is a powerful choice.  It's an 1887 painting called "Battle of Antietam" by Thure de Thulstrup, the Stockholm immigrant who also painted "Sheridan's Ride."   It shows the charge of the Iron Brigade of the West early in the morning on the day of the twelve-hour battle, the bloodiest day in the history of  American combat and without a doubt the most important military event of 1862.  According to the authoritative Fox's Regimental Losses, the Iron Brigade of the West, composed of five regiments from Wisconsin, Indiana and Michigan, suffered in proportion to its numbers the heaviest losses of any Union brigade in the war. 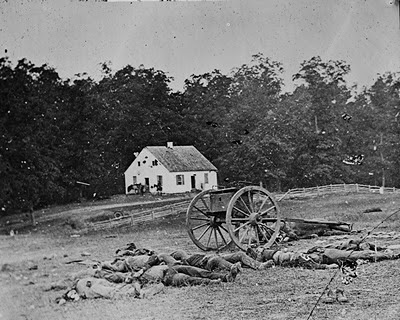 Look closely at the white building behind the fighting.   It's Dunker Church, house of worship for a pacifist anti-slavery sect of full-immersion Baptists (hence "dunkers") that lay in the midst of the battlefield.  Over 12,000 men would die that morning in the immediate vicinity of this building.  Here it is in an Alexander Gardner photograph taken two days after the battle, a photograph that Thulstrup may well have studied when making his painting 25 years later.

The Dunker Church that is today part of Antietam National Park is a reproduction; the original was destroyed by a storm in 1921.