Happy New Year.  Down by the Riverside is an African American spiritual whose exact pre-Civil War origin is obscure.  It may have originated among slaves held on and near the Georgia Sea islands, whose rich musical contributions include Michael Row the Boat Ashore, Wade in the Water, and Swing Low Sweet Chariot.  The riverside in question is simultaneously that of the Jordan and the Ohio, across which first the Hebrew slaves and then the American ones would find the promised land and live in peace.  The song was popularized after the war by the Fisk Jubilee Singers, who also (decades later, with a different lineup) made its first recording. 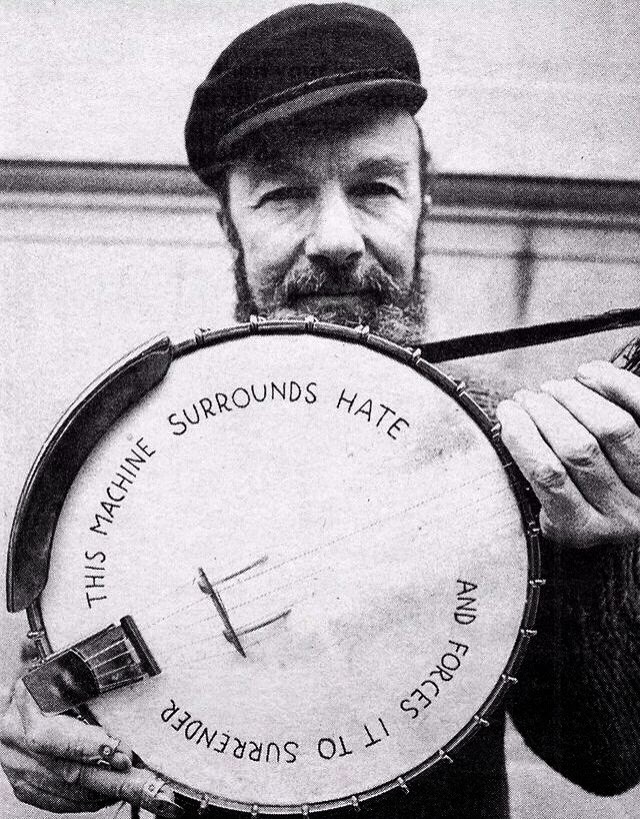 This video is from Rainbow Quest, a show that Pete Seeger hosted and produced with money from his own pocket for one season in the mid-1960s, during his fifteen-year ban from network television for refusing to name names before the House Un-American Activities Committee.  It was shot on a no-budget set without rehearsals or a studio audience and broadcast on a single, mostly Spanish-language, UHF (ultra-high frequency) station in Linden, New Jersey in the days when UHF reception was notoriously poor.  Clips from it are all over YouTube these days, not because of the production values, but because of the quality of the performances by Seeger and his great guests, at least some of whom declined payment for being there.  There are 39 episodes and only the one with an obviously stoned Johnny Cash is a disappointment. 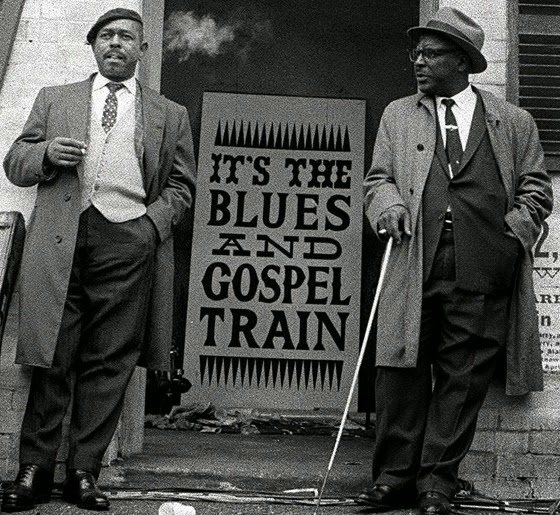 Here, Sonny Terry on harmonica and Brownie McGhee on guitar are less than halfway through their almost forty-year partnership.  They paired up in New York City in 1941 or '42, and toured (sometimes eleven months per year) and recorded together until 1980.  They were also occasionally actors, and here's a small irony--they appeared in the original Broadway production of Cat on a Hot Tin Roof with Burl Ives, who had a few years earlier named Seeger's name to HUAC.

Email ThisBlogThis!Share to TwitterShare to FacebookShare to Pinterest
Labels: "Down by the Riverside", Pete Seeger, Sonny Terry and Brownie McGhee

The Sons of Confederate Veterans' long wait at the Texas DMV may be over soon.

The Sons of Confederate Veterans seem a giant step closer to winning their fight with the Texas Department of Motor Vehicles over whether the state of Texas should issue specialty license plates displaying the Confederate battle flag.  The U.S. Supreme Court has agreed to hear Texas's appeal of the Fifth Circuit's Court of Appeal's decision overturning, on First Amendment grounds, a U.S. District Court's decision that the DMV was within its rights to decide not to issue the plates for the specific reason it gave at the time.

The issue on appeal relates to the Texas state law that says the DMV can reject any application for a specialty license plate if that plate's design "might be offensive to any member of the public."  Plenty of Texans testified to the DMV board that they were in fact offended by the proposed SCV plate's design, because they recognize the Confederate battle flag to be both a historical symbol of hate and a contemporary tool of racial intimidation, and the board voted the SCV's application down for that reason.

But there is nothing in the Constitution granting the right to go through life unoffended.  To the contrary, the First Amendment requires us to pretty much suck it up and get over it if someone chooses to use his or her individual right of free speech to offend us.  The question the Court has agreed to decide is whether a specialty license plate is part of an individual's private speech, in which case the Texas law against offensiveness is clearly unconstitutional, or if it is part of the state's speech, in which case the First Amendment does not apply and the Texas DMV is free to choose not to offend people.

The one dissenting Fifth Circuit judge argued for just such a category:


A fundamental error in the majority opinion is describing the government-speech doctrine as presenting a binary choice:  government or private speech. . . . Texas does not prevent SCV from engaging in speech on its or its members' cars in the same way that speech has traditionally been made:  by license plate frames, bumper stickers, window stickers, window flags, or even painting cars with the Confederate flag.  If SCV and its members can do all of those things, why is it seeking an order from a court compelling Texas to sell Confederate plates? The answer is the same answer in Summum [a precedent case involving a monument a religious group had attempted to donate to a municipal park]:  SCV seeks the kind of "adoption" and "embrace" that comes with being on Texas license plates, with appearing next to the state's flag, name, and likeness, and being given the kind of validation that follows from appearing on a state-issued license plate.  It is precisely the reason that SCV wants to force Texas to produce these plates that it should be denied a court order doing so.  Texas, like Pleasant Grove [the municipality in Summum], cannot be forced to associate with messages it does not prefer.

The analogy applies in another important respect.  Unlike pamphleteering, speeches, marches, picketing, and bumper stickers--all of which unquestionably involve private speech, even if they occur on government-owned property--erecting monuments and manufacturing specialty license plates both require the government's assistance and complicity.  That distinction, yet again, makes specialty plates more like park monuments and less like leafleting and bumper stickers.

Because of Texas's dumb law, it may be too late for the DMV to reject the plates for the right reason:  because they would honor men who took up arms against the United States.  Part of the SCV's argument for the plates is that Texas already issues specialty plates honoring Korean War veterans, Vietnam veterans, buffalo soldiers, women veterans, and other such groups; therefore that its refusal to issue plates for Confederate veterans amounts to viewpoint discrimination.   Texas failed to make
the obvious response:  the veterans it recognizes on specialty plates are all veterans of the U. S. armed forces, which Confederate soldiers were not.  Surely the government, even of a former Confederate state, should be able to honor those who fought to defend the United States without becoming obliged to embrace honoring those who attacked it.

Confederate soldiers insisted they weren't Americans and considered themselves the army of a foreign nation, and denying them tribute on specialty license plates is viewpoint discrimination only if Texas issues such plates honoring veterans of the Viet Cong or the Luftwaffe.  If the fact that the Confederates were nonetheless of domestic vintage is considered relevant, then Confederate soldiers deserve specialty plate recognition the same day other failed violent domestic groups such as the Weather Underground, FALN, and the Symbionese Liberation Army do so.  As long as Texas would be within its rights to deny applications for specialty plates to any of those veterans, it should be able to deny the SCV application.
Posted by Terry McCabe at 9:58 AM 0 comments

When I first started working at City Lit ten years ago, we put together a Christmas show that included "The One-Horse Open Sleigh," the original version of the song the public renamed "Jingle Bells."  As you'll hear, the chorus melody is a bit more complicated than the one we know today, and the song has perfectly lovely verses we don't know at all.

James Pierpont was born in 1822, in the heart of anti-slavery Boston, the son of the Reverend John Pierpont, an abolitionist Unitarian minister and famous in his day for several anti-slavery poems.  James's brother, also named John and also an abolitionist Unitarian minister, moved to Georgia to take on the daunting task of heading an anti-slavery congregation there.  In 1853, he invited James to move there as well, to become his church's music director and organist.

James was 31 and had not really settled down.  Married with two children, he had left his family behind with his parents in Massachusetts in 1849 to join the rush for California gold.  Finding none, he had returned home, but now left his wife and children again--this time for good--to go to Georgia.  In addition to fulfilling his duties at his brother's church, he spent the 1850s writing songs and instrumental pieces for the minstrel circuit.  One of the latter, 1854's "The Know Nothing Polka," was a tribute to the anti-immigrant, anti-Catholic, Know-Nothing Party.  A song, co-written in 1857 with lyricist Marshall S. Pike, "Gentle Nettie Moore," was recorded in the 1930s by The Sons of the Pioneers when Roy Rogers was still in their line-up, and is the uncredited basis for Bob Dylan's song "Nettie Moore" on his 2006 Modern Times CD.

Also in 1857, Pierpont wrote "The One-Horse Open Sleigh" for a Thanksgiving celebration at the church.  It was successful enough that the performance was repeated the following month at Christmas, and the song has been associated with Christmas (when there is more likely to be snow through which to dash) ever since.  Published that same year, it was re-published two years later under the title it had become popularly known by, "Jingle Bells."

By 1859, whatever demand there had been for an abolitionist church in Georgia had evaporated and the Reverend John Jr had returned to the North.  James stayed in Georgia with his second wife and family.  When the war broke out and his 76-year-old father enlisted as a chaplain in the Union Army, he enlisted in the Confederate cavalry as a clerk and continued to write songs, now exclusively pro-Confederate war numbers with such titles as "Strike for the South" and "We Conquer or Die."

Once the war ended, Pierpont never wrote another song.  He lived until 1893, teaching music and working as a church organist.  Inadequate 19th-Century copyright laws being what they were, he never made much money from his great Christmas hit.
Posted by Terry McCabe at 11:58 AM 0 comments