Here is the steed that saved the day. 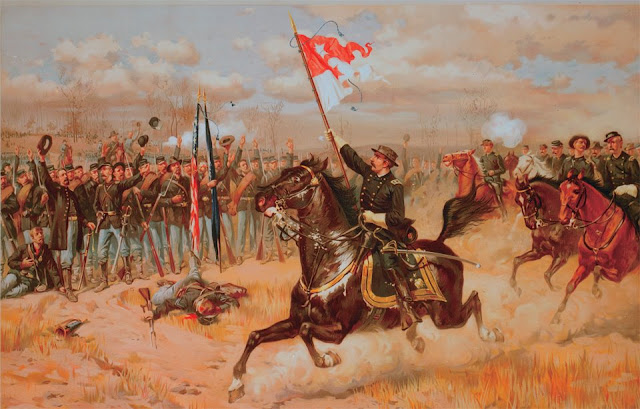 Okay, not only do I like the Library of Congress because they're collecting this blog, and because their National Jukebox is a great website, but this week they're publishing a terrific coffee-table book, The Library of Congress Illustrated Timeline of the Civil War.  I've spent much of the last few days browsing through an advance copy, and it's pretty great.  The timeline itself is excellent--nearly day-by-day entries covering important events over the length of the war, cross-referenced to related events on other days--but the real treasure trove is the collection of illustrations, some of them full-page, from the Library's vast and authoritative archive.

The picture above (click on the picture to enlarge it) is from the book.  It's a lithograph called "Sheridan's Ride," done by a Harper's Weekly illustrator named Thure de Thulstrup.  This is from the Timeline's entry for October 19, 1864:


On his quest to crush Jubal Early in Virginia’s Shenandoah Valley, Phil Sheridan rides into legend at the battle of Cedar Creek. After achieving victories at Winchester and Fisher’s Hill (see September 19 and 22, 1864), Sheridan has departed his camp for a strategy conference in Washington when Early attacks so unexpectedly that the army Sheridan has left securely encamped begins a pell-mell retreat. Sheridan’s return to the front on his warhorse Rienzi helps turn the morning’s humiliating defeat into an afternoon of over­whelming victory — and it generates a patriotic poem, “Sheri­dan’s Ride,” that is a pre-election rouser in the North. The Union is now firmly in control of the Shenandoah Valley — and the area is showing the effects of the “hard war” policy Grant has directed Sheridan to embrace (see July 30, 1864).

The book doesn't include the poem, so here's a link to it.  While I'm at it, here's a link to the John Philip Sousa piece commemorating the ride, in a perfectly swell 1902 recording at the National Jukebox, complete with galloping hoofbeats.  Sheridan's twenty-mile ride that day became so famous that it became possible to buy portraits just of Rienzi, the horse he rode; my great-grandfather had one on the wall when my family lived with him when I was a little boy.

The poor horse is still available for photo shoots, as Sheridan had him stuffed and he's standing in a glass case at the Smithsonian.
Posted by Terry McCabe at 7:01 PM