Happy New Year.  Here's the best song about the American Civil War ever written by a Canadian.
In searching for this video, I learn that Levon Helm--for whom, of course, the song was written--has refused to sing it in the 35 years since this performance was filmed﻿ for The Last Waltz.   Apparently he feels a farewell performance should be a farewell performance.
﻿
Posted by Terry McCabe at 2:00 AM 0 comments

Email ThisBlogThis!Share to TwitterShare to FacebookShare to Pinterest
Labels: Levon Helm, The Band, The Night They Drove Old Dixie Down 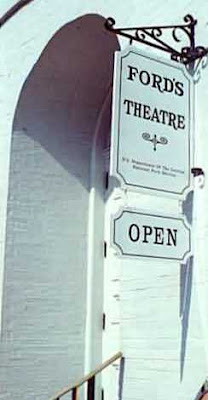 Our own Opus 1861: the Civil War in Symphony, a world premiere music theatre piece we're building from about 20 Civil War songs, goes up in April.  There are other Civil War shows going up around the country next year as well--I haven't done an actual count, but it seems like there will be more in 2012 than there were in 2011.
The Washington Stage Guild in downtown Washington DC is producing the world premiere of Amelia:  a Story of Abiding Love by Alex Webb from January 5-29.  It's a two-person show starring the playwright and his wife about a woman trying to free her husband from the Andersonville Confederate prison camp.  It's inspired by one sentence in a journal kept by someone at Andersonville:  "Rumor has it that a woman has come in here after her man."
Half a mile away, Ford's Theatre, itself of course a piece of Civil War history, stages the world premiere of Necessary Sacrifices by Richard Hellesen from January 20 through February 12.  Hellesen has written three other Civil War plays for Ford's; this one is about the relationship between President Lincoln and Frederick Douglass.  You would expect the people at Ford's, which besides being a working theatre is a national museum dedicated to Lincoln's legacy, to have its facts straight, but here's how they describe the play in their season guide:

Richard Hellesen’s new play Necessary Sacrifices imagines the
real-life meetings between abolitionist Frederick Douglass and
President Abraham Lincoln. In the midst of the Civil War, the
president responds to Douglass’s passionate arguments for allowing
African Americans the opportunity to be represented in the Union
Army, thereby fighting for their own freedom.

The problem with this is that Douglass visited Lincoln at the White House for the first time in the summer of 1863, whereas the federal government had begun recruiting African American enlistments in 1862.  By the time they met, Douglass was already the most prominent recruiter of black soldiers for the Union army, and both his sons had enlisted.  So had thousands of other African American men, so many that in May '63 the government had set up the Bureau of Colored Troops to handle the high volume of enlistments.  They met to discuss the unequal treatment of black soldiers which had caused black enlistment to slow down; once Lincoln heard Douglass's bill of particulars, he agreed with him and took steps to remedy matters.
So what gives?  Let's hope that the mistake in Ford's season guide is simply that, a mistake in the season guide.  But I fear that it might accurately reflect the play itself, which would indicate that Ford's has bought into the currently fashionable opinion that Lincoln had to be convinced of the morality of things like emancipation and civil rights.  Lincoln's well-known slowness to adopt emancipation and related issues like black enlistment as his administration's policies was essentially political, in the best sense of the word--to lose support for the war in the tentatively still loyal slave-holding border states would be to lose the war, which would doom any federal effort to do anything at all about slavery in what would then be a foreign country.  It can be argued, though I think not successfully, that his caution was bad political strategy.  But there is nothing in the historical record to support the idea that Lincoln disagreed with the moral rightness of what people like Douglass and Charles Sumner were urging him to do faster.
But I digress.  Touchstone Theatre in Bethlehem, Pennsylvania has a really interesting show coming up for a short run in April (the 13th through the 15th only, the same weekend we preview Opus 1861).  It's a community-based play called A Resting Place, about the lives of area residents during the Civil War.  The playwright is Alison Carey.  Here's a plot summary: "A loving mother decides to break ground for a memorial to the long-dead of our nation’s bloodiest conflict. But when she digs up more than she expects, Bethlehem present comes face to face with Bethlehem past."  Assuming it doesn't involve zombies, this sounds great to me.
By the way, the Touchstone website says this: "Produced in conjunction with Moravian College, Touchstone concludes the Historic Bethlehem Partnership’s commemoration of the 150th anniversary of the American Civil War . . ."  Really, Historic Bethlehem Partnership?   You're concluding your commemoration in 2012, three years before the anniversary period ends?  C'mon guys, step up to the plate. 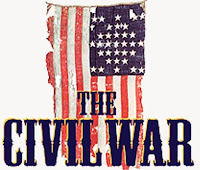 Finally, for now, the Masquerade Theatre in Houston, which does musicals, is putting together a show they're calling simply The Civil War.   Period songs, diary entries and so on, plus text from Lincoln, Douglass, and Whitman.  It runs May 18-27, and the Masquerade website says it'll be both "gut-wrenching and awe-inspiring."  My goodness.
Guts and awe aside, one cool thing about the graphic Masquerade is using for the show is that the tattered flag it shows is apparently a photo of the actual flag that flew over Fort Sumter.  Nice touch.
Posted by Terry McCabe at 9:50 PM 6 comments