Black Confederates? Not so much. 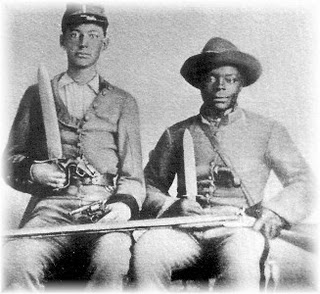 Elizabeth Margolius, who is directing Opus 1861 for us this spring, and I are in a workshop this week for the show, listening to an amazingly good bunch of singers and musicians play through the songs we've chosen in the structure we've tried to build, and talking about the songs and their context and so on.  One thing that's come up is the ongoing disinformation campaign to convince us all that there were black Confederate soldiers fighting for the South.  Thousands of them.

One of the singers recently saw an episode of Antiques Roadshow from 2009 that featured a Civil War tintype showing the above picture of a white man and a black man together, both armed and in Confederate uniforms.  The white's family history related that they were friends who served together.  Both men had the last name Chandler:  Andrew Chandler had owned Silas Chandler, but had freed him a year before the war, and both had enlisted in a Mississippi regiment of the Confederate army.

I don't doubt that Andrew Chandler's family historians are sincere, but the claim that Silas was an enlisted Confederate soldier is clearly preposterous.  The picture is more plausibly explained by the fact that many Confederates brought slaves along with them into their units, and frequently had them dress in uniforms like mascots.  Posing with his mascot, and letting the mascot hold arms like he's a real soldier, was apparently a diversion Andrew Chandler had time for.

The Confederacy outlawed using blacks as soldiers, until the Confederate Congress legalized it in an act of sheer desperation eighteen days before Lee surrendered.  Of course they wouldn't want black soldiers.  The South feared a widespread slave uprising, which was why John Brown's raid had galvanized them so.  Why on earth would they want to train thousands of blacks to use weapons and organize themselves into fighting units?  What happens after the South wins the war and then wants all these armed warriors to go back to picking cotton?

It turns out another PBS show, History Detectives, aired a segment about the Chandler tintype just last week and destroyed Andrew Chandler's descendants' version of things.  Andrew could not have freed Silas in 1860, because the Mississippi constitution at the time outlawed freeing slaves; it couldn't be done.  The 1860 census recorded zero free blacks living in the county where Silas resided.  The application Silas filed in 1916 for a Confederate pension when he was indigent and too infirm to work was on the form given to those freedmen who, while enslaved, had been used as servants by their enlisted masters ("What was the number of the regiment or name of the vessel in which your master served?").  And the roster for the regiment in question still exists; it lists Andrew as serving, but not Silas.  As for the weapons Silas holds in the photo, the Atlanta expert in Confederate photos consulted by History Detectives pronounced them "a photographer's prop."

The tintype is an unimportant curio, except that it's being used to further the agenda of Confederate apologists.  The Sons of Confederate Veterans and United Daughters of the Confederacy have placed on his grave a Confederate Iron Cross and a Confederate battle flag in order to claim him as a Confederate soldier.  This is just plain ugly.  The groups are part of a movement among "neo-Confederates" to establish the myth of black Confederates as history.  Their object, of course, is to make slavery seem to be not the main cause of the war:  if the South were fighting to preserve and extend slavery, would so many blacks have enlisted to help it?  So the movement spreads as fact, among other lies, the howler that Stonewall Jackson commanded two black battalions.

Their disinformation campaign has been conducted mostly on the internet, but briefly crept into actual print last year, when a fourth-grade history textbook used in Virginia schools repeated the Stonewall Jackson falsehood as fact.  The book's author, Joy Masoff, is not a neo-Confederate, merely an ignoramus (her book also got the number of Confederate states, and the year the U.S. entered World War One, both wrong).  After a public outcry, school officials pulled the book.  Its publishers say that from now on they are going to start having people who actually know things read their books before they send them out.

As for Silas Chandler, in 2008 fifty-two of his descendants signed a petition to get the Confederate paraphernalia removed from his grave.  An excerpt from a letter explaining their position:


In a cynical attempt to further their political objectives, the descendants of Silas’ oppressors have decided  to place an iron cross and a confederate flag on Silas’ grave.  This is equivalent to the descendants of the Gestapo placing a swastika on the grave of a Holocaust victim.  The placing of the confederate flag on Silas’ grave is a gross affront to the memory of Silas, and nothing more than  an attempt to rewrite history.

On October 3 of this year, eighteen days ago, Myra Chandler Sampson, one of Silas's great-granddaughters, posted the following reply when a commenter on an article about Silas asked if they had received an answer from either the Sons of Confederate Veterans or the United Daughters of the Confederacy: