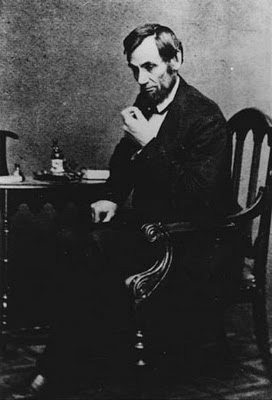 Discussing some upcoming Civil War plays around the country last week, I digressed briefly to complain about the currently stylish perception of Lincoln as having needed to evolve toward accepting the moral necessity of emancipation.  Today Richard Striner has a piece in the New York Times's Disunion blog making the same point better and at greater length.  The Constitution, as we all know, constrained the federal government from outlawing slavery in the states. The territories were a different story, and as the war progressed, Lincoln felt obliged to take the constitutionally questionable step of using his war powers to make the rebel states a different story too.  It's become conventional among people who aren't up on their history to conclude that the time it took Lincoln to take that step was the result of his lack of commitment to opposing slavery.

Libertarians like Ron Paul have a different wrong point to make:  intent on denying the federal government legitimate authority to act against the Confederacy, Paul says that the Civil War was "senseless" and that the federal government should have simply purchased all the slaves from their owners  and set them free.  Any good follower of Ayn Rand should realize that a transaction requires both a purchaser and a seller; if Paul thinks the South was full of slaveholders willing to sell all their slaves to the Lincoln administration, he may wish to pick up a history book sometime.

Striner's piece rebuts both these errors by describing Lincoln's attempt in 1861-'62 to get Delaware to pass legislation enabling the federal government to, yes, buy all its slaves and set them free.  He hoped a successful transaction in Delaware would provide opportunities to do likewise in other loyal slave states and thereby serve to weaken the Confederacy, perhaps even tempting some Confederate states back into the Union and ending the war in a matter of months.  It didn't work, because Delaware wouldn't agree to it.

The whole thing is worth reading, but here's a chunk of it:


In November 1861 he drafted legislation that he hoped would be introduced in the legislature of Delaware, the smallest of the slave states — and a slave state loyal to the Union. “Be it enacted by the State of Delaware,” Lincoln’s draft began, “that on condition the United States of America will, at the present session of Congress, engage by law to pay . . . in the six per cent bonds of the said United States, the sum of seven hundred and nineteen thousand and two hundred dollars, in five equal annual installments, there shall be neither slavery nor involuntary servitude, at any time after the first day of January in the year of our Lord one thousand, eight hundred and sixty-seven, within the said State of Delaware.” An alternative version of Lincoln’s text would have extended the phase-out of slavery in Delaware over 30 years.

The plan might sound outlandish, but it was wholly within Lincoln’s often misunderstood anti-slavery position. The conventional view today holds that Lincoln’s abolitionist sympathies evolved over time. But the real evolution wasn’t in his opposition to slavery per se, but in his thinking on how to bring about its end. Unlike some of his firebrand anti-slavery colleagues, he understood that any plan for blanket abolition would tear the country apart; indeed, he was proven right when the mere fear of such a plan drove 11 Southern states to secede.

The Delaware legislature voted Lincoln's plan down, and Delaware voters turned their congressman George P. Fisher--Lincoln's ally in the proposed legislation--out of office.  On July 1, 1862, Lincoln met with congressmen from other border slave states to push his idea of state-authorized federally-compensated emancipation, and found insufficient support among them to keep the idea alive.  Three weeks to the day later, he presented the first draft of the Emancipation Proclamation to his Cabinet.
Posted by Terry McCabe at 11:45 PM 0 comments