The point of our play needs to be more than "slavery is bad," because Uncle Tom's Cabin was the last play that needed to make that point.  It is also true that the intent of our Civil War Project is not to present a bunch of plays about an interesting historical period, but to try to explore, or examine, or illustrate, or something, the legacy of the war.  The Civil War is still with us, most obviously in our political divisions:  among those states which were in the Union back then, the most reliable (though not perfect) indicator of whether it's a red state or blue state today is whether, 150 years ago, it was a slave state or free state.  The conservative idea that the federal government over-regulates things and should instead not interfere with the workings of free enterprise is the descendant of the idea that the federal government should have no right to interfere with the spread of slavery.

Kristine has pointed out to me that the play's (historically accurate) scene in which Francis McIntosh is grabbed off a St. Louis street by police officers and ends up being killed by a mob is not that different in theme from the riots that happened last year in a St. Louis suburb because a police officer shot a black man on the street.

All of Kristine's plays are at bottom about the value of an individual human life.  Throughout this play, we see character after character confront the stakes of his own life as those stakes relate to the world around him.  Repeatedly, they choose to lose themselves in the pursuit of something larger than themselves, which paradoxically is what saves them and makes them who they are.  I think that's the point of our play.

It's worth reminding ourselves that the play--like most of our Civil War plays, by the way--does not take place during the Civil War.  This play spans from 1834 to 1850, which is to say a half- to full generation before the war.  That matters, because the war changed everything about the country, including how it looked.  It made the country more industrial and less pastoral, more urban and less rural, more mass-manufactured and less homespun, more dirty and less clean.  So our play takes place in a world we can't even find in old photographs.

Here's a happy coincidence:  one of the characters is Missouri Senator Thomas Hart Benton; his great-great-nephew, also named Thomas Hart Benton, was the 20th-Century American artist whose paintings evoke a mythic America.  Bright and colorful symbolic landscapes, vibrant clothes, wide blue skies, muscular people.  It's tempting to imagine that the old lost America actually looked like this. Here are five of his paintings, below which I ramble on some more. 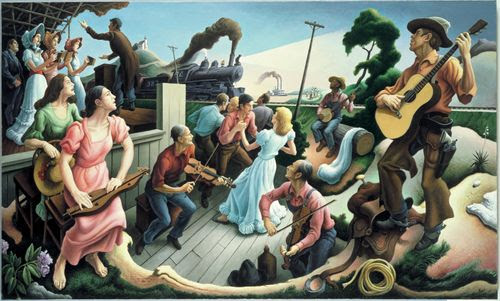 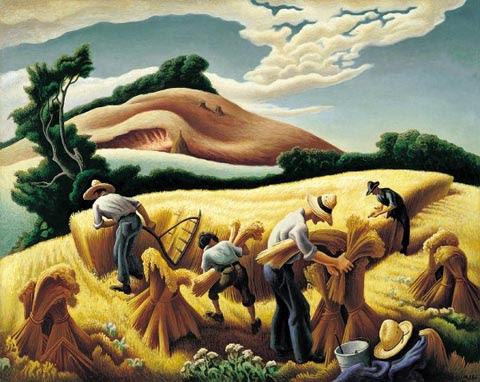 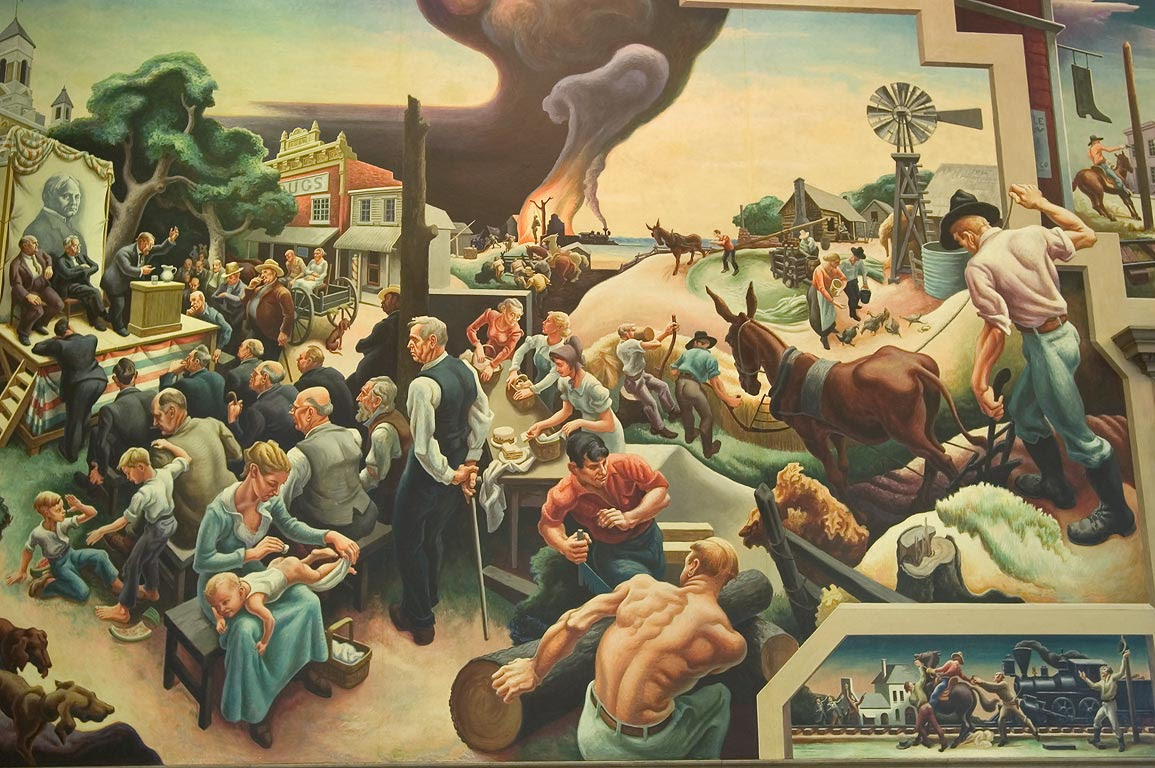 I would like us to use Benton's paintings as a starting point for design discussions.  I think the irony of slavery existing in a land founded on individual liberty is put on stage if the awful events of the play are happening in an American version of paradise.

Most of his settings are rural, whereas our play takes place for the most part in towns and cities, so maybe I'm talking more about his style than his specific content.  However, my favorite thing about his paintings in general are his beautiful and clean skies, which is one reason I have already mentioned I would like our set to have a cyc.  I think it will open up the space and suggest an infinite horizon.  The other reason is practical: the play is a bunch of short scenes, and we can go from one to the other without the dialogue stopping if we use a cyc to throw everyone into silhouette as soon as the old scene ends and keep it that way as actors exit and enter until the actors for the new scene are in place a line or two into the scene, which we then join in process by bringing up area lights.  This may be an easier device to make clear in person than by email, but it works great and will keep the play moving.  I believe City Lit has a cyc, and I will dig it out before our first face-to-face meeting.

One thing I like in particular about the bottom one of the five pictures is how he's used the stage space.  There's a country road, and a town square, and a business district, and whatever locale it is supposed to be where the two guys are sawing a log, and it's all  together and it's all distinct at the same time.  Not saying we need to do that--we may need something more fluid--but I do like how he's made it work.

Kristine has suggested, and I like the idea, that perhaps the actors never or almost never leave the stage.  Perhaps there are places for them to sit on the fringes of the action until they enter a scene.  I'm not married to this idea, but one advantage it might have relates to the costumes.  Every actor plays multiple characters, and the play is written against the idea of full costume changes every time an actor becomes someone else.  The idea that changing a single piece changes the character might be an easier sell if we see the change happen onstage.  As long as we look like a production and not like a workshop.  If we go this way, it seems like it will call for some place onstage for costume pieces to live when not being worn  Hooks on the wall, maybe, though I'm not crazy about the view of the wall being dominated by costume pieces hanging up in full sight the whole time.  So maybe something else.
As we have a fair number of political speeches, a raised speaking platform (one largish one?  a couple or a few small ones?  I dunno) somewhere onstage is probably a good idea.  Maybe with bunting as in the bottom painting?

Certainly the main floor of the stage is an open, fluid area (or areas) that becomes whatever the actors say it is.  The furniture can be as simple as a table and a few chairs that are used transformationally to suggest whatever we need.  I expect this means the lighting will be called upon to help define a given scene--a window gobo when Wright and Mooney are looking out at the mob, and so on.  At one point the script requires us to burn a man alive onstage, and suggests that be accomplished by shining a red light or two on him.  If there is any way we could achieve a flickering effect, that would be fab.
That's all for now from me.  Email me any questions you have, if you like.  See you soon.

Terry
Posted by Terry McCabe at 12:15 AM