Lincoln in the news on his birthday:

The Fresno Bee has an editorial out this week calling for Lincoln's birthday to be made an official holiday.  The editorial maybe doesn't do the best job of making the case:  it's unclear if it's calling for a national holiday or a California state holiday, and dwells longer on his having beaten Jack Armstrong in a fight back in New Salem than on his having beaten the Confederacy and saved the Union, plus it gets wrong the date he was shot.  But it recognizes the inadequacy of the lamest national holiday, President's Day, and points out the embarrassment that more states officially recognize Robert E. Lee's birthday than Lincoln's.  Seems California used to celebrate Lincoln's birthday, but in 2009--the Bee points out the irony that this was his bicentenary year--the legislature deleted the holiday to save money.

The New York Times reviews Lincoln Speaks:  Words that Transformed a Nation, an exhibit of original manuscripts of 80-some of his speeches and pieces of correspondence and so on, running through June 7 at New York City's Morgan Library and Museum.  Also included in the exhibit is material written to or about Lincoln, including Walt Whitman's handwritten "Oh Captain! My Captain!", and some books from Lincoln's personal library, including one of his Shakespeare collections opened to his favorite play, Macbeth.   Perhaps the most entertaining item exhibited
is the original of a letter mailed to Lincoln in Springfield a couple weeks after he was elected President; as the Times decorously puts it, the letter "remains unprintable in a family newspaper 155 years later."  Via the less fastidious Adam Matthew Digital, which has the original in its digital archives, here is a transcript:

And by doing God damn you

Speaking of insults, MLive.com--the M stands for Michigan--posts a piece today thanking Lincoln for either coining or popularizing the term "Michigander."  Attacking Lewis Cass, the 1848 Democratic nominee for president, Lincoln called Cass "the great Michigander," his dual point being that Cass's policies were as silly as a goose and that Cass was so fat he waddled.  And we are told that political discourse was more elevated then than it is now.  MLive points out that 58% of, um, Michiganders now use the term to refer to themselves.  It does not point out that the term of Lincoln's day for someone from Illinois, a "sucker," has not held up as well.

The Religion News Service  says that anyone claiming to be outraged by President Obama's
comments at last week's National Prayer Breakfast should also feel the same way about Lincoln's Second Inaugural Address: 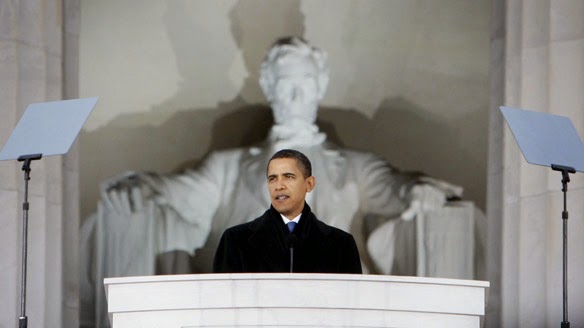 Obama appeals to the mystery of God and, without specifically saying it, asks us to remove the speck from our own eye before we set out to remove the log from our neighbor's eye. . . .  When Obama tells Americans to get off their "high horses" and realize that sin has been present throughout human history, even American history, he echoes Lincoln's words on that rainy morning on March 4, 1865. . . .  Both the North and the South, he said, "read the same Bible and pray to the same God, and each invokes His aid against the other.  It may seem strange that any men should dare to ask a just God's assistance in wringing their bread from the sweat of other men's faces, but let us judge not, that we not be judged.  The prayers of both could not be answered.  That of neither has been answered fully.  The Almighty has His own purposes."

On the other hand, Mark Levin on Sean Hannity's FOX News show (as a service to the readers of this blog, I am not providing a link) says that if Lincoln had shared the sentiments Obama expressed at the prayer breakfast, he would not have fought to end slavery.  Sigh.

The Lebanon (Pennsylvania) Daily News believes that Lincoln would not at all approve of pretty much anything Obama says or does.  It delves into metaphysics to prove the point:  "Abraham Lincoln's birthday is upon us.  And with a reluctant but free-spending captain now at the helm of the free world's flagship, we are reminded how sorely we miss Lincoln.  Were he with us now, at the advanced age of 206, what would he think of how his beloved United States has evolved in the 150 years since that fateful night at Ford's Theater?  What would he think of the Oval Office's current occupant?"  Remarkably, the answer to this poser is that Lincoln would agree with the opinions of the op-ed writer asking the question:  "he would want to know what happened to the role of government, and why it sees fit to intrude so regularly in the lives of its citizens."  Good to know.

Finally, down in Dallas, a lock of Lincoln's hair was recently sold at auction for an amount equal to a year of his presidential salary, $25,000.  It was part of a large collection of Lincoln memorabilia (much of it, for instance a piece of blood-stained linen from his deathbed, and Booth's arrest warrant, centered around the assassination) that brought in a total of $803,889, twice what was expected.  Left unsold was an 1862 letter from Lincoln acknowledging that the Civil War was not going well.

Email ThisBlogThis!Share to TwitterShare to FacebookShare to Pinterest
Labels: Lincoln