More on the Cold Civil War 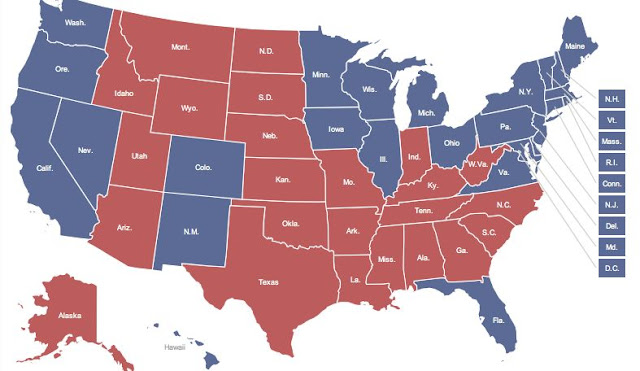 The numbers from the election give Andrew Sullivan's theory that we're in what he calls "a Cold Civil War" a mixed verdict.  As we know, Obama carried Virginia and Florida, so Sullivan's precise prediction did not come to pass.   And for what it's worth, Romney's average margin of victory in the twelve former slave states he won was 15.9%, actually less than his 23.7% margin in the other states (two free states in 1861 plus ten that were then territories) he won.

"For what it's worth" is a meaningful qualifier in this case, however, because the percentages above don't separate out the African American vote, 93% of which went nationally for Obama.  Sullivan is talking about the white vote.  There are a lot more blacks in the South than in the western states where Romney had most of the rest of his victories, and once this fact is adjusted for, Sullivan's theory may well be vindicated.

That involves more research than I am willing to do on his behalf, but here are a couple of quick and rough sets of calculations.  Census data from 2010 says that black population in the twelve states Romney won that were neither in the Confederacy nor border states averages only 3.2% of population in those states.  Assuming that this percentage is roughly reflected in voter turnout, subtracting 93% of the black vote from Obama's total share in those states--38.15% to Romney's 61.85%--adjusts Romney's winning margin in those states up to 28.5%, not all that different from his actual 23.7% margin there.

By huge contrast, the census says the black population of the fourteen former slave states--including Virginia and Florida, the two Obama won--averages 19.5% of the total population of those states.  Making the same assumption about voter turnout, and making the same adjustment by removing Obama's 93% of the black vote, Romney's margin of victory across that region of the country--even still averaging in the two states he lost there--jumps from 15.9% all the way to 41.1%.

Does this prove Sullivan's inference that much opposition in the South to Obama's re-election was racially motivated?  No it doesn't, but it seems to leave the question open.