Andrew Sullivan and George F. Will disagree about the Civil War's impact on next week's Presidential election, and in doing so demonstrate that discussions about the war's continuing resonance in our national life are frequently at bottom discussions about race.

Both their heads were talking on This Week this week when Sullivan laid out his theory that the U.S. is in "a Cold Civil War,"  by which he seemed to mean that the polarizing political division in the country is to a large degree geographically reflected in old national maps of free states and slave states.  The next day he made the same point on his Daily Beast blog:  "if Virginia and Florida and North Carolina flip back to the GOP from Obama this November, as now looks likely, Romney will have won every state in the Confederacy."  He gets into more detail by showing this map of his election-day prediction 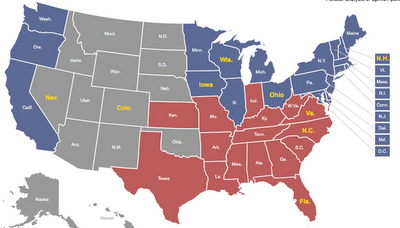 juxtaposed with this map of how things stood in 1861: 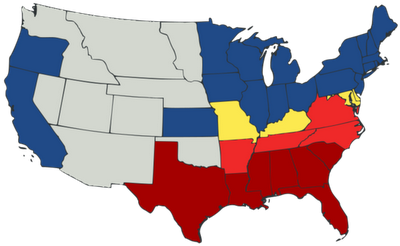 On both maps, the grey areas are those that were not states in 1861 and therefore not part of the point he's making (Washington State was admitted in 1889 and therefore should be grey in the first map).   On the second map, the blue states are 1861's free states, all of which of course stayed in the Union.  The yellow states are the four slave states that also stayed in--Missouri, Kentucky, Maryland and Delaware.  The red are the eleven slave states that seceded.

On the first map, he predicts that the Republicans will take all of the old Confederacy, split the border states 50/50 with the Democrats and pick up only Kansas and Indiana from the free states.   By using 1861 as his base year, he neglects to account for West Virginia, which broke away from Virginia in order to stay in the Union and was admitted as a separate state in 1863.  By rights he should have used a Civil War map that had it yellow, but he has it right that West Virginia is expected to go red this year.

He may be wrong about Virginia. Nate Silver, the most meticulous analyst of polls there is, currently gives President Obama a 62% chance of carrying it, which would reverse part of Sullivan's equation:  West Virginia, which fought for the North, would vote with the South, and Virginia, state of the Confederacy's capital city, would vote with the North.

But his broader point--that the states of the old Confederacy have realigned themselves politically with today's Republican Party--is both interesting (in that it illustrates how the two parties have shifted over time) and unremarkable (in that the realignment has been in process since the 1960s).  What set Will off was the conclusion that Sullivan did not quite state, but also did not disclaim when Will disputed it:  if the three formerly Confederate states that Obama carried in 2008 vote for Mitt Romney this time, there might be a racial element to that fact.  Whether that's so or not, Silver's weighted averages of state polls show that if the Confederacy were a real country right now, Romney would be coasting toward a landslide win there.

Sullivan's implied conclusion is not logically rigorous, built as it is from a less than ironclad prediction and a hunch about its causation.  It was an easy mark for a sharpshooter like George Will.  "Democrats have been losing the white vote since 1964, so that's not news ," Will responded. "Here's what we're trying to talk about.  In 2008, Obama gets this many [hand held high] whites, this time the polls indicate he might get this many [hand held lower].  We're trying to explain this difference.  Now there are two possible explanations.  A lot of white people who voted for Obama in 2008 watched him govern for four years and said, "Not so good.  Let's try someone else."  The alternative--the Confederacy hypothesis--is those people somehow for some reason in the last four years became racists."

Will here commits his own logical fallacy by excluding the middle.  Are these two mutually exclusive options, one of which he has phrased to make sound ridiculous, really the only two possibilities?  One imagines not.

Will is also not the best spokesman for the position that race does not play a part in voting decisions, as he had, in his Washington Post column only 26 days earlier, attributed support for Obama to racial motives.  He found no reason in Obama's record to explain why he is favored to win re-election and so offered this theory:

Some aspect of support for Obama is identifiably racial, but it is absurd to say that some aspect of opposition to him is?  Well.

Will gave the game away--except that Sullivan didn't seem to notice--by mentioning that the loss of the white vote to Democratic presidential candidates dates from the year a Democratic president signed the 1964 Civil Rights Act.  Certainly no one maintains that the exodus of Southern whites to the Republican Party was triggered by the Nurse Training Act or the Wilderness Act, both of which LBJ signed that same year.

Neither party has a history to brag about as regards its willingness to tolerate racism.  After being on the wrong side of the slavery issue, the Democrats spent a century courting the votes of Southern white racists.  Franklin Roosevelt brought Northern blacks into the Democratic coalition (Southern blacks mostly couldn't vote), but it was only when the strength of the civil rights movement in the mid-1960s forced the Democrats to choose between these two parts of their coalition that they became clearly the party of civil rights.  The Republicans' successful "Southern strategy," originated by Richard Nixon and carried on ever since, welcomed the disaffected racists into the party of Lincoln with code words rather than with open invitations.   It's why Ronald Reagan spoke of "welfare queens" and why George H. W. Bush ran the Willie Horton ad.

Surely Reagan, Bush, Romney, Paul Ryan, Will, and the great bulk of Republicans are not racists.  They have the same political differences with Obama that they would have had with President Hillary Clinton.  Just as surely, however, the 30% of the Republican electorate who say they believe Obama is an African-born Muslim are motivated by something other than evidence.  That support for the Romney/Ryan ticket spikes in the area of the country with its least fortunate racial history suggests that there are things less fluid than political party affiliations.
Posted by Terry McCabe at 9:13 PM