Alonzo Cushing and the Medal of Honor

President Obama yesterday signed the defense authorization act that passed Congress last week, which means that, along with all the rest of it, Section 569 becomes law.  Here it is:


SEC. 569. AUTHORIZATION FOR AWARD OF THE MEDAL OF HONOR TO FIRST LIEUTENANT ALONZO H. CUSHING FOR ACTS OF VALOR DURING THE CIVIL WAR.

(a) Authorization.--Notwithstanding the time limitations specified in section 3744 of title 10, Unites States Code, or any other time limitation with respect to the awarding of certain medals to persons who served in the Armed Forces, the President may award the Medal of Honor under section 3741 of such title to then First Lieutenant Alonzo H. Cushing for conspicuous acts of gallantry and intrepidity at the risk of life and beyond the call of duty in the Civil War, as described in subsection (b).

(b) Acts of Valor Described.--The acts of valor referred to in subsection (a) are the actions of then First Lieutenant Alonzo H. Cushing while in command of Battery A, 4th United States Artillery, Army of the Potomac, at Gettysburg, Pennsylvania, on July 3, 1863, during the Civil War. 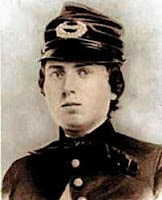 Alonzo Cushing, member of the West Point Class of 1861, was only 22 and had already fought at Fredericksburg and Antietam.  The battery he commanded at Gettysburg was stationed at what would become known as the Bloody Angle, an area enclosed by a zigzagging section of the stone wall on Cemetery Ridge and including the copse of trees that was the target destination of Pickett's Charge.  He had already been wounded twice, but not incapacitated, during the hour-long artillery duel that preceded the Charge, and had lost so many men that he had only enough left to operate two of the battery's six guns.  Ordered at first to fall back to where his wounds might be attended to, he instead asked for and received permission to move his two workable guns forward to the stone wall itself.  Cushing's sergeant, Frederick Fuger, wrote later:


The Confederate Infantry . . . now began their advance. They were the best troops in Lee’s army, namely Pickett’s Division, consisting of three brigades, Garnett’s, Kemper’s and Armistead’s in the center supported on the left by General Heth’s Division and on the right by General Anderson’s.

Kemper was on the right, Garnett in the center and Armistead on the left, marching in close order with measured steps, as if on parade. They moved toward us solidly and deliberately, and when they were within 400 yards, Battery “A” began firing at them with single charges of canister, mowing down gaps in their lines which appeared to me the front of a company, this they filled up and still came on.

As Pickett's Charge neared its climax, with the Confederates within 150 yards, Cushing was shot through the mouth and killed instantly.

This is heroic enough, certainly, but over the decades Cushing's story has been embellished, mostly due to Sergeant Fuger's campaigning for his own Medal of Honor (it used to be acceptable to do that), which he won in 1897.  Fuger apparently had a few different versions, and details survive in online accounts today:  we are told that one of Cushing's earlier wounds was so grievous that it exposed his intestines and he held them in with one hand while, no longer able to shout orders loud enough to be heard over the shooting, he leaned on Fuger and whispered commands which the sergeant faithfully transmitted to the battery.  Please.  The Gettysburg National Military Park blog surely has it right:


What Cushing did at Gettysburg needed no embellishment. His gallantry was recorded in after-action reports by every officer that served near his battery. . . . Fuger’s embellishments to Cushing’s tragic story gained traction over the years, largely because no one questioned the sergeant’s account, and maybe because we all wanted to believe what he wrote and said about Cushing. After all, Fuger had been awarded the MOH. But this did not mean he was above spinning romances about the battle like others we have discussed on this blog. In this case however, how Cushing led and how he died needed no spin or embellishment [from] Fuger.  As Colonel Norman Hall wrote two weeks after the battle, “Lieutenant Cushing, of Battery A, Fourth U.S. Artillery, challenged the admiration of all who saw him.” [Official Records of the War of the Rebellion, 27, 1:437]

The Medal of Honor had been created in 1861 and as of 1863 was not yet awarded posthumously, so Cushing was not eligible at the time.  Decades later this criterion was changed, but no one proposed Cushing for the Medal until 1987, when Margaret Zerwekh,  from Cushing's birthplace of Delafield, Wisconsin, wrote to her senator, William Proxmire.  Zerwekh, now 93, has campaigned on Cushing's behalf for 26 years and has been through a lot of Wisconsin senators;  a recent one, Russ Feingold, calls Cushing and Zerwekh both heroes and pushed in Congress for Cushing's medal for a decade.   It almost happened in 2010--a lot of online sources actually say that it did happen then--but at the last minute House-Senate negotiators for some reason dropped the provision from the final version of that year's defense bill.  The provision in this year's bill has backing from both current Wisconsin senators, Ron Johnson and Tammy Baldwin.

And now the president has signed the bill with the provision intact, so it seems like a sure thing.  The two steps left should be no problem:  Secretary of Defense Chuck Hagel is expected to make the formal recommendation, and President Obama is expected to accept it. Whenever the ceremony is finally held, Alonzo Cushing will have waited longer than any other Medal of Honor recipient.