"To the living we owe respect, but to the dead we owe only the truth." --Voltaire

The Sons of Confederate Veterans, the group behind the ongoing attempt to get the Confederate battle flag displayed on specialty license plates in Texas, is one of the groups responsible for desecrating the grave of Silas Chandler, a former slave, with Confederate paraphernalia.  The group also figures in Confederates in the Attic, one of our Civil War Project shows, and is one of the prime movers behind the Big Lie about the war:  that the Confederacy was not a deeply racist slavocracy which went to war to protect its financial interest in human chattel. 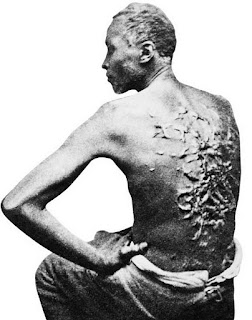 To you, Sons of Confederate Veterans, we submit
the vindication of the Cause for which we fought;
to your strength will be given the defense of the Confederate soldier's good name,
the guardianship of his history,
the emulation of his virtues,
the perpetuation of those principles he loved
and which made him glorious
and which you also cherish.
Remember, it is your duty to see that the true history of the South is presented to future generations.
Lt. General Stephen Dill Lee, C.S.A.
April 25, 1906


The Sons date from 1896 and is one of several organizations of the period founded for the perfectly respectable reason of honoring the group's actual fathers who had served valiantly in the Confederate army, risking (and many of them giving) their lives.  Even today much of their work involves the upkeep of gravesites and assistance with genealogy research and so on.  The more visible part of their work, however, is insidious:  to bring into the mainstream and make respectable the false idea that the Confederacy itself deserves to be honored.

Much of this work depends on minimizing the Confederacy's commitment to slavery as a foundation of its existence.  So we are told that Robert E. Lee hated slavery: he didn't; he saw it as a necessary evil that the white race had to bear in order to do God's work benefiting the black race.  We are told that thousands of blacks enlisted in and fought for the Confederate Army: of course they didn't; not only did Confederate law prohibit this until the CSA was gasping its last, the Confederate army refused to recognize even captured black Union troops as legitimate POWs but instead executed some of them as rebellious slaves.  The fact that the Emancipation Proclamation, as a product of Lincoln's war powers, could only free slaves where the rebellion existed, while emancipation in the loyal states had to wait for the Thirteenth Amendment, is twisted so that we can be told, hey, slavery was abolished in the South before it was in the North!--as if emancipation at the point of a Union bayonet is a credit to the Confederate slaveowner.

The license plate controversy represents another aspect of their work: to (1) get the Confederate flag displayed in official auspices of any sort, and (2) equate Confederate soldiers in the general mind with the soldiers who fought at Normandy and Khe Sanh and Lexington, as well as with the soldiers they fired upon at Antietam and Shiloh and Gettysburg.  "These veterans need to be honored too," a Sons spokesman testified to the Texas Department of Motor Vehicles Board before the Board voted 8-0 against allowing specialty plates displaying the Sons logo, which features the Confederate battle flag.  The Sons have said they plan to appeal, and in fact have won such appeals in a number of other states.

A number of years ago the Civil War documentarian Ken Burns, himself descended from Confederate veterans, caused a furor in neo-Confederate circles when he discussed the eternal Civil War paradox of American respect and affection--North and South--for the valiant men who tried to destroy the country. ''I said it was interesting to note that a man held responsible for more loyal American deaths than Tojo or Hitler became our most cherished general,'' Burns recounted later.  For this statement of verifiable fact concerning Robert E. Lee, he ended up stripped of the CSV membership the organization had bestowed on him.  Verifiable facts are not the friends of neo-Confederates.

Our new government is founded upon exactly the opposite idea;
its foundations are laid, its cornerstone rests, upon the great truth that
the negro is not equal to the white man;
that slavery subordination to the superior race is his natural and normal condition.
This, our new government,
is the first in the history of the world
based upon this great
physical, philosophical, and moral truth.
Alexander Stephens
Vice-President, Confederate States of  America
March 21, 1861

"I think I have no prejudice against the Southern people," Lincoln said in 1854.  "They are just what we would be in their situation."  True enough now as then, and if our beloved ancestors had been on the wrong side of the two great moral questions of the age, slavery and treason, we would not be eager to acknowledge the fact either.


That said, a tribute built on lies is no tribute at all, and the neo-Confederate disinformation campaign does the Confederate dead no honor.  Most Southerners might not choose U.S. Grant as the eulogist for the Confederate army, but his recollection of  Lee and his men at Appomattox Court House has more truth, and more tribute, in it than any part of the tissue of lies put forth by neo-Confederates:

Whatever his feelings, they were entirely concealed from my observation; but my own feelings, which had been quite jubilant on the receipt of his letter, were sad and depressed. I felt like anything rather than rejoicing at the downfall of a foe who had fought so long and valiantly, and had suffered so much for a cause, though that cause was, I believe, one of the worst for which a people ever fought, and one for which there was the least excuse. I do not question, however, the sincerity of the great mass of those who were opposed to us.

The last word here goes to Rev. George V. Clark, testifying before the Texas DMV Board on November 10: